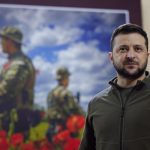 Few of us had ever heard of the 44-year-old Volodymyr Zelenskyy until the period before the unprovoked Russian invasion of Ukraine on 24 February 2022. A former actor, comedian, and television star, he contested and won the election for the presidency of his native country in 2019. He campaigned on an anti-corruption platform and his […]